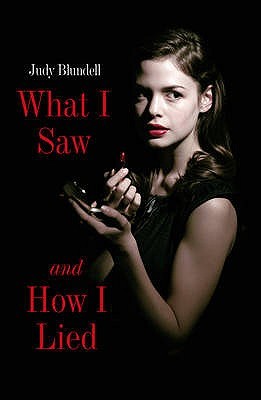 What I Saw and How I Lied

It's 1947 and 15-year-old Evie is desperate to grow up, go on dates and look glamorous like her mother. But then a handsome and mysterious ex-GI turns up. Peter served with Evie's stepfather during the war and seems to have a strange control over him; slowly, Evie realises she's falling for Peter, despite his dark secrets.

What I Saw and How I lied is a stand-alone historical fiction novel. It is set only a few years after the end of World War II and follows a teenage girl as she comes of age, discovers secrets and falls in love all in the middle of a conspiracy.

I bought this book years ago and the sole reason why I bought this book (this was during the time I had the phase when I bought books solely on their covers) was because the cover was really awesome!! It is a paperback book but it has a dust jacket like a hardback, can I say cool.... And it's the only book which I have which is like this and I haven't seen any other books like it yet either. So yes, when I bought this book I read it and I have to admit this is the fifth time that I have read this book and it is just as good every time.

I loved the plot and story in this book. It had me hooked for the first reason was because it was historical fiction and it was set around the time of World War II. The other reason was that it was not just a coming of age story but held dark and dangerous conspiracies and mysteries throughout the whole book while we got to see the story of Evie growing up. It was a perfect mix  of themes to keep me on edge and I loved every twist and turn.

Evie was the substance behind this book and she was the one who I wanted the best for. I wanted her to grow up and be happy. I invested so much of my heart just for Evie. Peter was another substantial character which grabbed my attention and he had me rooting for him too. The other characters in the book, including Evie's stepdad, his mother, Evie's mom and varies other characters all made the book what it was. They were all different, all complex with different personalities, motives and situations in their life and they all truly gave the full picture of what life was like back in 1947.

As for my likes and dislikes, I can fully say that I enjoyed every piece of this book. Yes, at the beginning there is a few dull moments, but those moments are needed for the rest of the story. Evie also did some things which I would not have agreed with but I could understand her motives behind it all and she changed dramatically from the beginning to the end of this book.

The ending I found to be bittersweet through the events that unfurled. I was happy with the ending that was given and the information that was given to close this book. I enjoyed it and couldn't have see a better ending for this book. It closed up with all questions answered.

Judy Blundell is the author of this book and this was the first book which I have read from her. She has written another historical fiction YA book which was published in 2011 titled 'Strings Attached' and I shall look into it and perhaps read this book in the future.

I would recommend this book for historical fiction, realistic fiction, mystery book lovers. This book holds the appeal of historical fiction and also keeps you on your toes in the way of a mystery. It may be more suited for younger young adult (15 - 17) as this was the age which I first read this book and have continued to do so even at 19. It really all depends on taste.

If you would like to purchase this book, please head over to The Book Depository using the following link as I am a book affiliate there :)
http://www.bookdepository.com/book/9780439903486/?a_aid=yabookaholic123
Posted by YAlover96 at 03:10