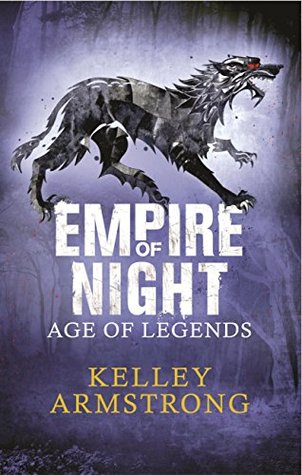 
SPOILERS FOR PREVIOUS BOOKS AHEAD


Sisters Moria and Ashyn are the Keeper and Seeker of Edgewood. Or at least, they were.

Their village is gone. Their friends have betrayed them. And now, the emperor has sent them on a mission to rescue the children of Edgewood—accompanied by Prince Tyrus and a small band of imperial warriors. But the journey proves more perilous than they could have imagined. With treachery and unrest mounting in the empire, Moria and Ashyn will have to draw on all their influence and power to overcome deadly enemies—not all of them human—and even avert an all-out war


I bought this book on the day of its release and I can say that I'm absolutely disgusted with myself that I left it till now to read. I loved the first book of this series so much. The creepy atmosphere, the characters and I even felt so betrayed and heartbroken because of my new fictional crush in this book. *cough, cough, Gavril, if anyone wanted to know.*

Empire of Night continues on where Sea of Shadows ended. Ashyn and Moira are in foreign territory at a palace looking for help from the king and his warriors against the threat if a man that completely decimated their village and neighbouring villages.

In this book we get just as much action as the previous book. Empire of Night also kept that creepy atmosphere that I loved in Sea of Shadows. I was excited to see where the plot of this book would go and I can say that it was not disappointing. We are introduced to new characters, new love interests which I may find questionable (it's like Will and Jem all over again, who do I choose???), new creatures and new locations in this world which I loved seeing.

I was glued to the pages of this book because I am seriously invested in the lives of all these characters. I loved swapping from points of views but found them to be at such cliffhangering ending when the switch would occur. This was a particular annoyance at Ashyn's concluding chapters because it ended on a cliffhanger and then we saw nothing from her afterwards! It makes me crave the next book so damn much.

But I really can't wait for the next book. I am enjoying the way the plot is going and I really want to know how things are going to go. I want answers to all those mysterious things that are going on and I just can't wait to see how Kelley Armstrong concluded the series in the next and final book 'Forest of Ruin.' It is definitely a book I'll be getting on its release date!.